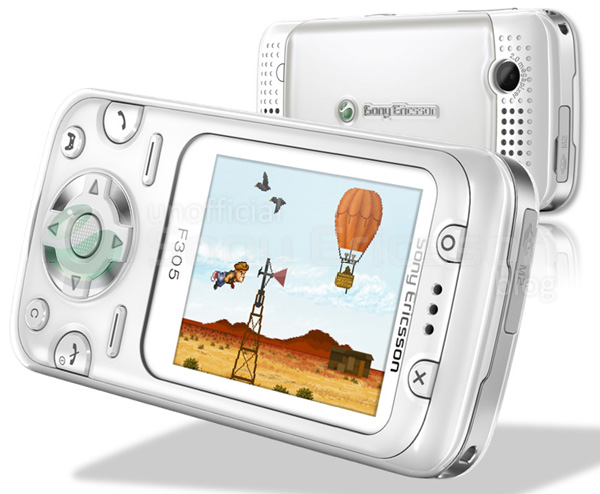 Following the popularity of the Nintendo Wii, many companies are including motion sensing in their devices. These devices range from game controllers and laptops, and now to mobile phones. Sony Ericsson’s F305 is the first phone branded with ‘motion gaming’ abilities but that doesn’t warrant you the right to flail your arms around in public as you’re trying to bowl on your cellphone.

The phone comes pre-loaded with three games: Bowling, Bass Fishing and a Jockey game, which all enable you to use the motion sensing to play each game. To play each game all you have to do is imitate the movement as if you were doing it in real life. For example, if you’re playing bass fishing all you would need to do is act out the movement of casting your line. If you’re playing bowling you would need to enact the movement of throwing a ball down a bowling lane. Despite motion controls included in each game, the phone does feature of set of Playstation-esque buttons.

The phone itself is a quad-band GSM phone with support for EDGE network speeds, it also has a speaker on the back of the device, so everyone can hear when you got a strike in bowling, as well as support to challenge friends in some games via Bluetooth. The device has quite good audio playback features, as most Ericsson phones do, as well as a built-in FM Radio.

The phone comes in Polar White or Mystic Black and has a 2-inch TFT display at 176 x 220 pixels. The Sony Ericsson will be officially announced tomorrow and will be released in selected markets Q3 this year. No idea yet on pricing, but seeing as this phone is very basic and in the low to mid-range of phones we think it would have a fairly low price tag.