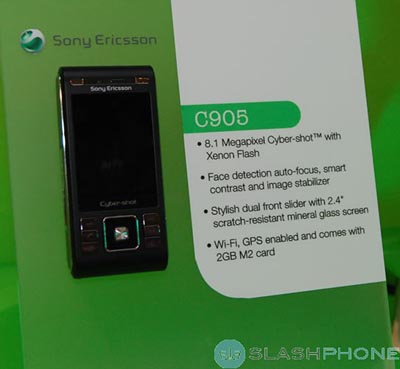 The lines between what is a camera and what is a phone are really starting to get blurred. Pushing the envelope that much further is the Sony Ericsson C905, the first 8.1 megapixel camera phone from the popular handset-maker.

It’s not like the resolution of your snapshots will be the only thing that will astound you either, because the Sony Ericsson C905 also has a real Xenon camera flash, face detection, 16x digital zoom, red-eye reduction, auto focus, smart contrast, and image stabilization. The only thing that’s missing from the camera side of things, I’d say, is some optical zoom.

There will be three variants, including the C905a that gets quad-band GSM and tri-band UMTS/HSDPA. Look for it to launch in early Q4 in your choice of Night Black, Ice Silver, and Copper Gold.