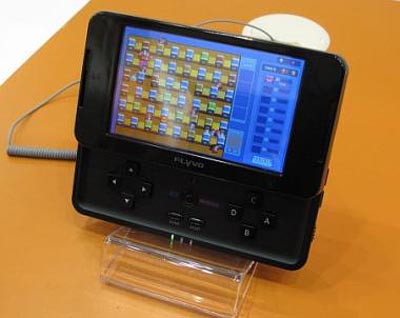 When I was over in Taipei for COMPUTEX earlier this month, I was told that WiMAX would be the next big thing. This is because people would be able to stay more connected than ever, blanketing themselves in all things online no matter where they were. We knew that WiMAX was going to make a big splash with subnotebooks and smartphones, but I didn’t know that gaming would play into the picture as well.

The Flyvo G100 is a mobile gaming device in the same ilk as the Sony PSP and Nintendo DS, except it comes equipped with a high-speed WiMAX connection. Powered by Windows CE Professional 5.0, the Flyvo handheld has a standard directional pad and four face buttons. Beyond the WiMAX, the Flyvo G100 also has a 4-inch touchscreen, WiFi, Bluetooth, 4GB internal flash memory, and microSDHC expansion slot. It can do music and videos, as well as games.

As with all other mobile gaming devices, the success of the Flyvo G100 will rest solely on the games that are developed for it. I have a feeling people are getting a little tired of Zuma and Bejeweled clones. Look for the G100 to launch in South Korea this December. The American launch is being planned for Q2 2009.