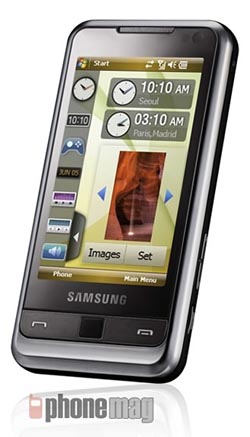 Touchscreen phones seem to be all the rage these days, but you’ve got to wonder if something like the Samsung Omnia will be able to compete adequately against the juggernaut that we all know and love as the iPhone 3G. Perhaps the biggest appeal to Apple’s mobile phone is its slick user interface. Thanks to the video embedded below, you can now compare Cupertino with the UI found on the Samsung SGH-i900 Omnia.

As you recall, the Samsung Omnia is powered by Windows Mobile 6.1 Professional, but it has a skin overlaid on top to give the user a more pleasing menu and interface. This works in much the same way as the Asus “Glide” and HTC “TouchFLO” innovations that make Windows Mobile just a little prettier. Aside from the refreshed look, the Samsung Omnia i900 also gets quad-band GSM, HSDPA, a 5 megapixel camera, GPS, FM radio, and Wi-Fi.

Personally, I don’t think Samsung has done much with the Omnia to differentiate it from the rest of the Windows Mobile 6.1 crew. Yeah, it’s got some gussied up colors, but it doesn’t seem that they have gone much further than that. The background music sure is soothing though.