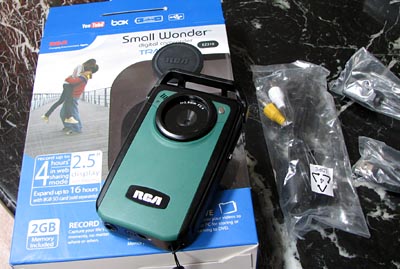 And the world of affordable video recording just got a little more crowded. Following in the footsteps of devices like the Flip Video and the Creative Vado is the RCA Small Wonder Traveler, the most expensive of the Small Wonder series of digital camcorders from RCA.

I’ve had the opportunity to take the RCA Small Wonder Traveler, also known as the EZ210, out for a test drive these past few days and while it is a valiant effort, the Small Wonder Traveler ultimately comes up short for a number of reasons. There are some nice inclusions too.

The whole point of these inexpensive digital camcorders in the first place is that they are very affordable and are remarkably easy to use. Thankfully, the RCA Small Wonder “Traveler” EZ210 satisfies both of these requirements. It costs just $150 and even grandma will be able to use this. Just turn it on, aim, and hit record.

Among the rest of the features and specs are the following:

Personally, I find that the two best features of the RCA Small Wonder Traveler are the use of regular AA batteries and the inclusion of an SD memory card slot. By using regular batteries, it means that you will never have to go looking for a wall outlet. Just bring along a couple extra rechargeable batteries and you’ll never miss a memorable moment.

Unlike the Flip Video and Creative Vado, the RCA Small Wonder Traveler uses SD cards for memory. Just like the battery scenario, you’ll never run out of recording space either. Pack along a couple of postage stamp-sized memory cards and you’ll get hours and hours of footage. The RCA Small Wonder Traveler can also take still photos, if you get tired of the video thing.

When you behold the slightly rubberized finish on the RCA Small Wonder EZ210, you are given the impression that this thing will be able to handle whatever Mother Nature throws at it. This isn’t entirely true. The Small Wonder Traveler may look rugged, but it is not waterproof, dust-proof, or shockproof. Instead, it is merely splash resistant. Don’t try dunking it in the pool. There are no rubberized seals or grommets to keep the water out. I recommend against any nasty drops either, even though the battery contacts are shock-proof.

I personally found the RCA Small Wonder Traveler to be too large and too clunky, especially when compared to something like the Flip Video Mino or the Creative Vado. It’s a lot chunkier and has a certain 1980s feel to it. You know how everyone had that yellow Sony Walkman in the 80s and the kid with the crappy RCA tape player was mocked and abused? Expect the same reaction when you whip out the Traveler in public.

The size of the lens is also very deceiving. Following with the rugged theme, the lens of the RCA Small Wonder Traveler is protected by a large rubber cover. This gives you the impression that you are going to have a big lens for video recording. Unfortunately, it’s just a big piece of plastic surrounding what almost looks like a pinhole camera. The rubber cover stays on just fine, but the lens isn’t much bigger than what you’d find on a cell phone.

There are more compression artifacts under Web Quality mode, understandably, but even High Quality mode left much to be desired. The video is washed out and has some very strange “white” lighting effects. You get flashes of light when you move around and don’t even think about taking videos in less than stellar conditions. Even slightly dim rooms will result in some very dark (and mostly unusable) videos.

Aside from the “flex” that you experience with camera phones and their plastic lenses, the picture and video quality on the Traveler isn’t much better than a mobile phone. 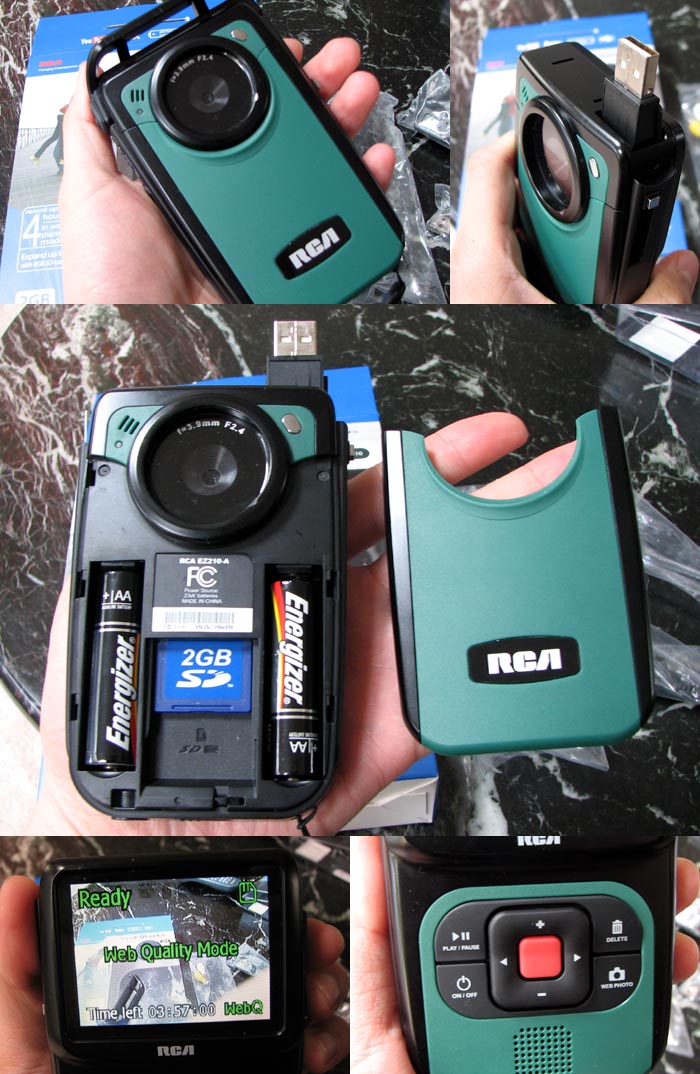 The included RCA Memory Manager software is handy, but incredibly rudimentary. To install the software, all you have to do is connect the RCA Small Wonder to your computer for the first time. It was prompt you to go through the installation process. From then on, it will auto-detect when the camcorder is connected to your computer.

The RCA Memory Manager software can be used to review the videos and pictures captured with the handheld, and you can also use it for some very simple editing. Videos can be tripped, cut together, and saved. It is also through the RCA Memory Manager that you can directly upload your videos to YouTube. Strangely, the tool only allows you to add three keywords to your upload. You can add many more tags through the YouTube website itself.

Don’t expect much from the RCA Memory Manager. Realistically, you’re better off just browsing through the contents through Windows Explorer and then editing using your own software (Windows Movie Maker). Novice users will appreciate its simplicity, but intermediate users will find RCA Memory Manager to be severely lacking.

There are certainly some positives here for RCA when it comes to the Small Wonder Traveler EZ210. The use of regular AA batteries and an SD memory card expansion slot make it very easy to use this camcorder anywhere, not having to worry about running out of power or memory. The large 2.5-inch display is a huge advantage over the tiny screen of a Flip Video and being able to take stills is a bonus.

Unfortunately, this large clunker isn’t nearly as rugged as it looks and the video quality is mediocre at best. I like the inclusion of a USB extension cable and the video codec is pretty standard, but when you have such washed out video with lots of compression artifacts, you might as well be recording on your mobile phone. I’m wondering if the smaller, less rugged RCA camcorders are any better.

In the end, if you have the storage space to spare, you’re probably better off dealing with the larger file sizes created by your regular digital camera in video mode. This is true with the Flip Video as well. If you want better video quality, you’ll want to invest in a real camcorder and not this budget handheld.