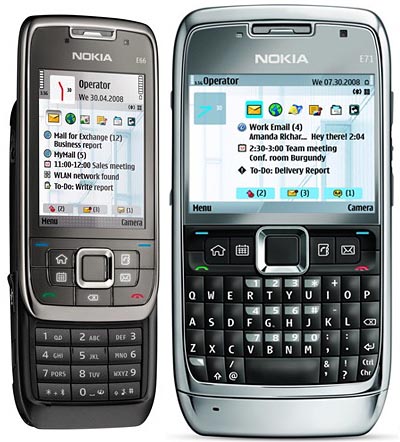 We’ve seen some spy shots and even a hand-on video already, so it’s about time that Nokia finally went official with a couple of their enterprise-minded smartphones. The Nokia E71 and Nokia E66 were officially announced early this morning, giving business users a pair of new options when it comes to staying connected away from the office.

The Nokia E71 is the QWERTY-packing device on the right and it will likely be the product of choice for people who send a lot of mobile emails and text messages. The form factor is right in line with the BlackBerry devices of the world, as well as handhelds like the Motorola Q9h and Samsung JACK. The user interface has also been improved for this go-around. The Nokia E66 is the slider on the left and it does not have QWERTY. Instead, you get a standard numeric keypad, so it may not be the best option for people who send a lot of messages on the go. The more compact form factor will aid in its portability, however.

Aside from some official product shots, Nokia is keeping pretty quiet about pricing and availability details. We’re told that both devices will ship some time in the third quarter of this year. The Nokia E66 will be “under $500” and the Nokia E71 will be “over $500.”