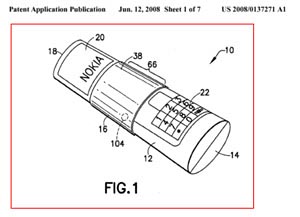 It seems that cell phone manufacturers are starting to run out of standard form factors for their handsets. They’ve got candybars, clamshells, sliders, touchscreens… where else can they turn for something new and exciting? Leave it up to the world’s largest mobile phone company to create something totally different, as evidenced by this latest Nokia cell phone patent filing.

Dubbed the Nokia Tube, it is a mobile phone that is oddly shaped like a toilet paper roll. The display wraps around the top portion of the phone and then a standard numeric keypad wraps around the lower portion of the roll. Going further, there is some sort of “ribbon” mechanims that can slide up and down the Nokia Tube, possibly working in the same way that an active slider would on a slider phone. The patent says that depending on the position of the ribbon, you could be working with a phone or a camera.

This patent may appear to be totally tubular, but I wouldn’t expect Nokia to take this idea much further than the drawing board.