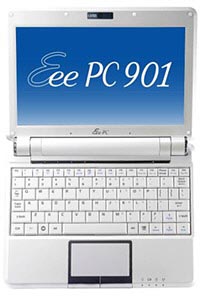 I thought that the whole idea behind the Eee PC line of subnotebooks was that they would be ultraportable and ultra-affordable. Both of those requirements are slowly getting thrown out the window, especially with today’s announcement of US pricing for the new models.

As you recall, the Asus Eee PC 901, 1000, and 1000H were officially unveiled at COMPUTEX Taipei. We were all pretty excited about the prospects of a larger display and Atom-powered processing, but we were never fully prepared for the hit that our wallets would have to endure.

The Asus Eee 901 has been priced at $599, about double the price of the entry-level 2G Surf. The Asus Eee PC 1000 and 1000H are even more expensive, getting tagged at $699 and $649, respectively. That’s getting in on the territory of “full” laptops, so you’ve got to wonder if the Eee is still worth your while. American launch dates have not been revealed, but the UK launch is apparently set for July 1st.