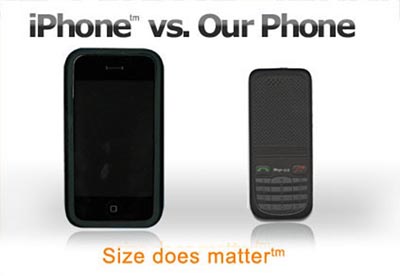 You’ve got to have some guts if you want to compete against the juggernaut known as the iPhone 3G, so you’ve got to hand it to the folks at Hop-On for even making the attempt. No, the HOP1809 does not have a large multi-touch display nor does it come with fancy-schmancy user interface, but it does do 3G and it does it for a lot less money.

The HOP1809 cell phone from Hop-on retails for a mere $125 and it’s perfectly capable of doing the 3G high-speed data thing. Better still, Hop-on says that the HOP1809 is a lot easier to handle than the iPhone 3G, thanks to its significantly smaller footprint. Going even further, the HOP1809 has a camera view finder on the front of the phone, “facilitating true video conference calls.” Hop-on president Peter Michaels is “really excited with this new series.”

I don’t think anyone is going to confused the HOP1809 with an iPhone killer. With a 1.8-inch CSTN display, MIDI ringtones, and a REX operating system, this Hop-on offering really shows its $125 price tag.