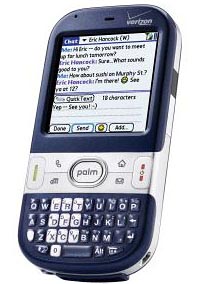 It might only be a penny shy of a Benjamin, but the Palm Centro in Cobalt Blue is still quite a deal over at Verizon Wireless. The official retail price of this Palm smartphone is a mere $99.99, assuming that you’ll ink your signature onto a two-year customer agreement and deal with a potentially convoluted $70 mail-in-rebate.

The Palm Centro party has already begun over at Sprint, so it’s nice to see the other major American CDMA service provider join in on the Centro festivities. The specs are much the same with the Palm OS and QWERTY keyboard, so you really shouldn’t expect Verizon to bring anything terribly exciting to the picture. Well, other than that nifty Cobalt Blue finish.

Look for the Cobalt Blue Palm Centro to start shipping across the country tomorrow. Verizon suggests that you pair the Centro with its $30 wireless email and web for smartphone plan.