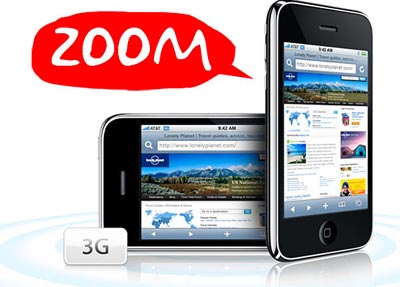 A resounding cheer could be heard all across the nation (and possibly the globe) when Steve Jobs took to the stage and officially unveiled the 3G iPhone to the world. He promised a wireless data connection that would be a full 2.4x faster than the EDGE found in the first iPhone, but why can’t the iPhone 3G go even faster?

As it stands, AT&T is only going to let the iPhone 3G connect at a maximum of 1.4Mbps. Contrast this to the 3.6Mbps downstream that the AT&T HSDPA network can handle and the 7.2Mbps connection that AT&T is promising by the end of the year. If the 3G iPhone is truly capable of being this fast, why would they want to limit your mobile experience? Well, the biggest hurdle is battery life. If you go through data at the top end of HSDPA, your phone isn’t going to last more than a couple of hours. As it stands, you can only achieve five hours of wireless surfing, so you can imagine how bad it would be at 7.2Mbps.

Secondly, while AT&T says that they’ll be able to handle the bigger data draw, they don’t want to deal with the increased cell site congestion and backhaul. “It’s not like the pipe is unlimited”, so it’s better to throttle the connection (and keep it reliable) than to let all hell break loose (and have connections dropped).