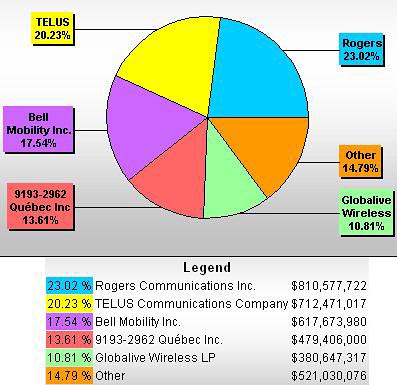 Many Canadians are hoping that a new player will be able to enter the mobile phone market when the wireless spectrum auction finally draws to a close, but as it stands, we’re seeing a lot of familiar names near the top of the list. Round 49 of the Canadian Wireless Auction drew to a close with a total of $3,521,806,112 in total bids. That’s over $3.5 billion, in case you can’t keep track of all them commas.

Coming in with nearly a billion dollars worth of bidding itself is Rogers Communications, snatching 23.02% of the total bid. Coming in at number two and number three respectively are the other two big dogs in the yard, Telus Communications and Bell Mobility. These are the three largest wireless providers in the nation today, but rounding out the top five are two relative newcomers to the national scene. In fourth place is Quebecor, a firm that could be backed by foreign interests to launch a new nationwide GSM provider in Canada. Polishing off the top five is Globalive Wireless LP.

These five participants account for over 85% of the total bid.