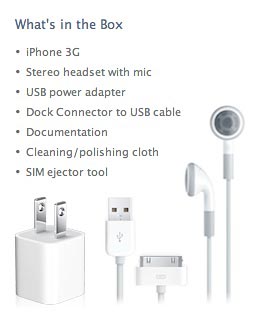 While most other people are clamoring over the high-speed connectivity that will soon by offered by the Apple iPhone 3G, some of us are curious as to what is included in the box. Christopher Mascari of Gizmodo dug a little deeper as to the contents of the iPhone 3G’s box and he came across a couple of strange observations.

First, aside from the usual assortment of goodies that accompany the Apple iPhone, the 3G model will apparently come with a paper clip replacement. Officially, this little pin is being called the SIM ejector tool. Current iPhone users have had no trouble using a paper clip for this purpose, but I guess the Cupertino crew wants to make that part of the process a little easier for their fans.

The other major observation is the redesign of the wall adapter portion. It’s gotten smaller and the plug prongs look like they cannot flip into the body. Also, while you get a dock connector to USB cable, there is no iPhone 3G dock included in the box. You’ll need to pay (probably fifty bucks) for an actual dock.