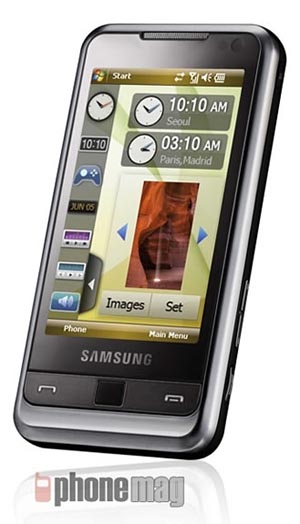 The timing of this announcement is either very good or very bad, because it seems like Samsung has decided on the same day to unveil the Samsung i900 smartphone as the day that we are expecting to see the new 3G Apple iPhone. The latter hasn’t been announced officially yet, but I don’t think Samsung is stealing any of Steve Jobs’ thunder.

The Samsung OMNIA, also known as the Samsung SGH-i900, does not have a physical keypad in the traditional sense. Instead, it features a large 3.2-inch WQVGA touchscreen display. Thankfully, there are hard keys for answering and hanging up on a call. The 12.5mm profile and platinum-look finish make for an attractive handset as well.

Other notable specs on this smartphone include Windows Mobile 6.1 Professional, quad-band GSM, 7.2 Mbps HSDPA, 5MP CMOS camera with smile detection, up to 16GB of internal memory, GPS navigation and geotagging, TouchWiz user interface, FM radio with RDS, Bluetooth 2.0, and integrated Wi-Fi. Look for it launch during CommunicAsia in Singapore later this month.