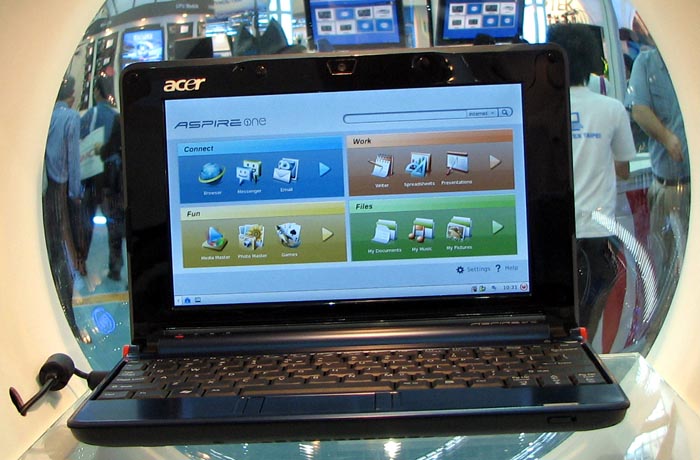 The Asus Eee PC is no longer the only subnotebook in town with devices like the MSI Wind and HP Mini-Note already hitting the market. Now another major manufacturer has officially entered the fray. The Acer Aspire One subnotebook was unveiled to the world at Computex Taipei 2008, approaching much the same market as its other compact counterparts.

Like the new Asus Eee PC 901, the Acer Aspire One is also powered by the new Intel Atom processor. Featuring an 8.9-inch display, this subnotebook gets loaded with Mobile WiMAX connectivity, Firefox pre-installed for faster and more secure web surfing (taking a jab at IE, are we?), an integrated Acer Crystal Eye webcam, smart file management, dedicated SD expansion slot, and an Internet-centric user interface for click-and-launch convenience.

Going hands on with the Acer Aspire One, I found that the keyboard was still a little too small for comfort. The mouse trackpad has a similar configuration as the HP Mini-Note, placing the buttons on either side of the trackpad rather than below it. Build quality appeared to be quite good and I liked the sleek appearance of the rounded hinge. It looks like Acer could have a winner on their hands with the Aspire One. Pricing has been set at $399.