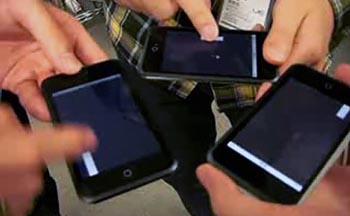 Before there was such a thing as an Italian plumber named Mario, before there was an incredibly hungry orange blob named Pac-Man, there was a phenomenon that swept America that was comprised of little more than two paddles and a bouncing block. It was Pong. And now it’s back.

Putting an interesting twist on the classic arcade game, Battle Pong for the Apple iPhone is a multi-player challenge that spans across multiple devices. Each player controls his or her own paddle via the touchscreen display, but the bouncing ball manages to transfer from one iPhone to the next.

At this time, the game is not able to detect the relative distance between devices. In this way, the ball seems to just “jump” from one iPhone to the next. Battle Pong probably works on the iPod touch as well.