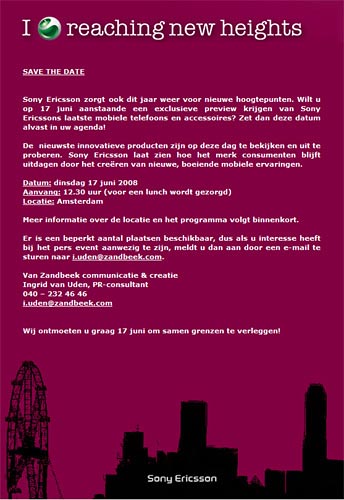 A press event has been scheduled by the good folks at Sony Ericsson on June 17 in Amsterdam and the web is slowly getting a little abuzz over what announcement could be coming from the well-respected phone maker. It is also during this time, from June 17 to 20, that Communicasia is being held in Singapore, so there is a distinct possibility that the phone (or phones) being revealed in Amsterdam could also make an appearance there as well.

In the press announcement, we are told that Sony Ericsson is looking to reach new heights, but they make no further mention of exactly what handset we should expect nor do they give any indication that would point us toward one handset or another. Given all the attention that has been given to leaked pictures and videos of the Sony Ericsson P5 Paris, I have a feeling that the SureType-packing slider could make an appearance in Amsterdam.

Of course, that’s just personal conjecture. We won’t know for sure until June 17.