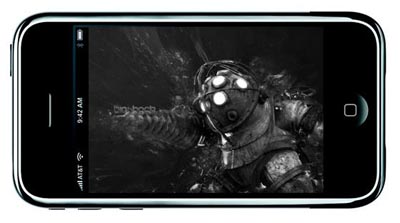 The Apple iPhone, if Steve Jobs is to believed, can quite possibly be all things to all people. It can be a pocket-sized web surfing device. It can be a portable media player. And it can be a mobile gaming machine as well. The Nokia N-Gage platform may be getting Metal Gear Mobile, but the crew in Cupertino are fighting back with some stealthy action of their own.

As it turns out, a version of the popular game BioShock is being developed for the Apple iPhone. This is according to Sean Malatesta of IG Fun. I’m not really sure how well conventional controls will be able to work with the iPhone for a game as complex as the BioShock first-person shooter, but some unique implementation of the touchscreen and accelerometer could prove to provide a fascinating experience.

If the Apple iPhone gets populated by other major titles like BioShock, it could become a viable and legitimate competitor to the Sony PSP and the Nintendo DS.