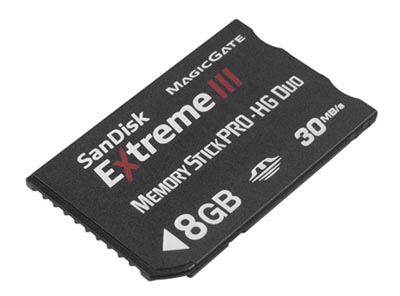 There’s fast and then there’s blazing fast. SanDisk is one again pushing the envelope with the announcement of a new Extreme III Memory Stick PRO-HG Duo memory card. This new line of memory cards is supposed to be among the fastest for the format, transferring those 1s and 0s at a rate of 30 megabytes per second. That’s megabytes, not megabits for any of you keeping score at home.

The sustained 30MBps transfer speed is supposed to be achieve for both writing and reading data. To put this figure in perspective, the non-HG Extreme III Memory Stick from SanDisk is only able to achieve an 18MBps transfer speed. This new memory card represents an increase of over 50%.

The Extreme III Memory Stick PRO-HG Duo should work with most Sony home and professional still cameras, as well as certain camcorders and the Sony PSP. Sony was actively involved in the development of this particular card. Look for the 4GB and 8GB versions to sell for $90 and $150, respectively. They launch next month.