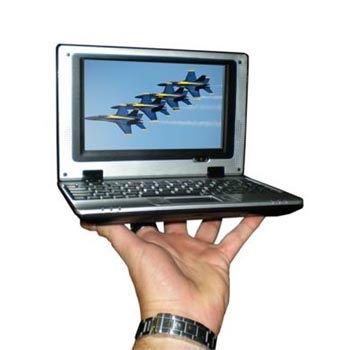 Just like the MSI Wind, Acer Aspire One, and the Dell Mini Inspiron discussed earlier today, we’ve got ourselves yet another subnotebook that wants to compete with the almighty Asus Eee PC.

Available starting today is the RazorBook 400, a low cost portable Internet appliance that is meant to supplement your home PC or notebook computer. Sounds a lot like the Eee, doesn’t it? Created by 3K Computers, the RazorBook 400 gets loaded with a 7-inch (800×480) display, 4GB solid state drive, 400MHz processor, 512MB of RAM, Linux, and a “full-size” keyboard. It also weighs in at a mere two pounds and has a slightly smaller footprint than its Asus counterpart.

The other part of the equation that is smaller than the Eee PC 701 is the price. The 3K RazorBook 400 retails for just $299.