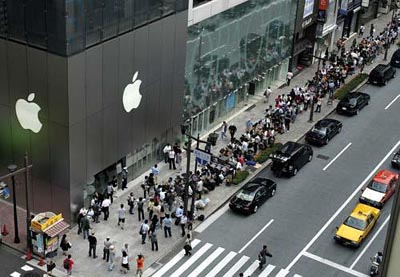 A recent Internet survey was conducted among over 40,000 Japanese consumers regarding their brand preferences, and the Cupertino-based Apple came out on top as one of their favorite tech brands. The survey was conducted between October 2007 and March 2008 by Gfk Marketing Services Japan.

Apple received top grades in the areas of laptops, desktop computers, and portable music players. Japanese consumers liked the physical design of Apple products — gotta love that iPod — and they also cited computability with Windows as a reason for their choice. This is interesting, considering that Japanese society typically has a high level of national pride… yet they chose an American company as the best.

In the area of flat-screen TVs, Toshiba was the preferred brand. Second and third place went to Hitachi and Sharp, respectively. Interestingly, Canon was the favorite for digital cameras and digital video cameras, but as soon as you hop over into SLR territory, Nikon was the brand of choice.