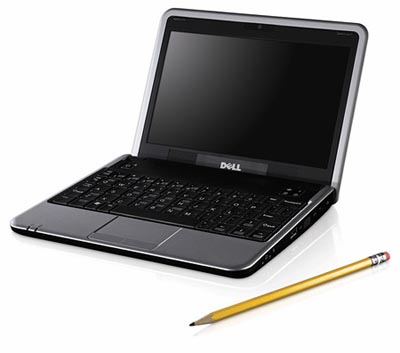 It’s probably not entirely fair to the companies involved, but whenever anyone comes out with a cell phone that features a full face touchscreen, the handset is inevitably compared to the Apple iPhone. By the same accord, whenever someone creates a laptop-like device with a screen smaller than ten inches, the device gets compared to the Eee PC. That’s just the way things are.

Fighting in much the same market as the Asus Eee PC is an upcoming “mini Inspiron” subnotebook from the good people at Dell. The aesthetics of this smaller laptop are much the same as other Inspirons, the biggest (no pun intended) difference being its relatively small stature. The Dell mini-Inspiron will come equipped with an 8.9-inch display and it should be priced at under $500.

We expect that the Dell Inspiron Mini will get an 8-in-1 card reader, webcam, media playback buttons, wireless access options, and your choice of Ubuntu Linux or Windows XP Home. More details should become available at Computex next week.