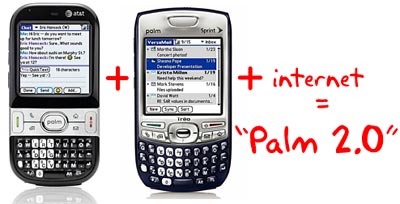 Palm CEO Ed Colligan decided to do a little arithmetic the other day, explaining the nature of a new prosumer brand that will fit somewhere in between the Centro and the Treo lines. The new OS is being referred to as Palm 2.0 and it will take some existing elements from the current OS and take on more Internet connectivity.

More specifically, we can expect that Palm 2.0 will be “driven around the Internet and Web-based applications.” Instead of having everything housed within the phone itself, you could be running things like Google Maps on a more remote basis. They’re saying that this is a “very modern take on the original OS.”

We know that Palm isn’t quite as popular as it was during its heyday, but with a Palm 2.0 upgrade, they may once again emerge as a major player, standing toe to toe with the likes of BlackBerry and Windows Mobile.