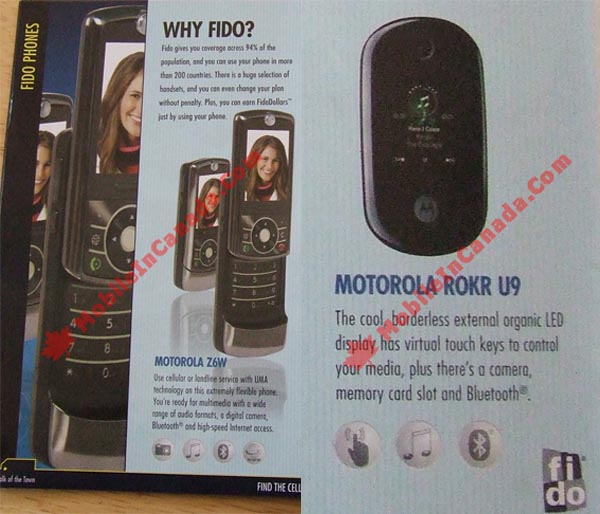 You may have been pretty excited when Fido launched its UMA service earlier this month, granting you to the opportunity to take advantage of some crazy UMA action. Surfing on over to the Fido website, this excitement was quickly crushed when you discovered that the only Fido phone that works with UNO is the Nokia 6301.

The dog of a mobile service operator is on the cusp of offering its Fido UMA subscribers a couple more options. According to a recently released Best Buy ad, Fido is going to launch the Motorola Z6w slider and the ROKR U9 flip phone very soon, both of which will be perfectly capable with Fido’s UNO service. Yes, these phones play friendly with a two-headed dog.

The Motorola Z6w is the slider version of the RAZR form factor, getting equipped with a 2.0 megapixel camera and Wi-Fi connectivity. Also rocking the Wi-Fi (which is necessary for UMA) is the Motorola ROKR U9, a handset with PEBL-like tendencies. It gets a 1.3 megapixel camera. Both handsets should become available some time next month.