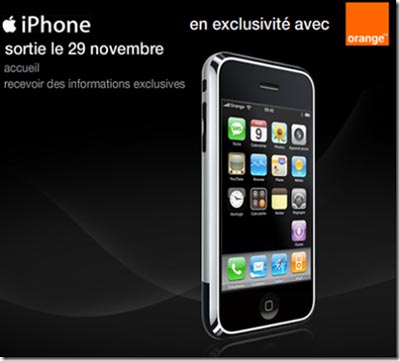 While we hear that AT&T might be subsidizing the price of the 3G iPhone when it launches next month, Orange France could let you buy a new 3G iPhone for just 50 Euro. That works out to just under US$80, a killer deal for the second coming of the Cupertino Jesus phone.

Chalk this one up as a rumor for now, but word is that Orange France will provide customers with a new 3G iPhone in exchange for 50 Euro and their old iPhone. I’m not really sure why Orange would want to collect all the old iPhones, because the old device won’t be nearly as popular as the new one. Not that many people would even be interested in buying a refurb’d unit, methinks.

I seriously doubt that AT&T (or Rogers Wireless) will be offering any sort of similar deal for Americans (and Canadians), but we should expect some sort of subsidized price with contract.