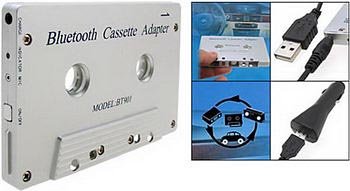 Are you rolling around town in an older car that still happens to have a tape deck? You can now make use of that ancient piece of hardware thanks to this Bluetooth Cassette Tape Adapter.

I’ve seen similar devices in the past wherein they created an MP3 player that was shaped like a regular cassette tape, but this is the first time that I’ve seen something like this that rocked Bluetooth. The idea is that by placing this “tape” into your car deck, you can stream music from any Bluetooth source. Got a Walkman phone? Now you can play it through your car stereo.

I’d imagine that the sound quality wouldn’t be the best, but assuming that the connection is strong, it can’t be that much worse than playing an actual cassette tape. Strangely, the adapter needs to pull power from your car’s DC port, so you’ll have a cord dangling between your deck and the cigarette jack. Available now for $35.