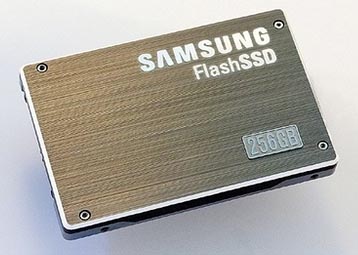 Flash-based solid state drives are supposed to offer all sorts of advantages over conventional hard drives, but one area where they’re still losing is capacity. Samsung is working hard to overcome this hefty hurdle and the Korean manufacturer has just achieved yet another milestone for the solid state lovers of the world.

Samsung has just announced that they have created an extra speedy 256GB SSD, effectively doubling the storage capacity found on the drive that Sammy unveiled just four months prior. In fact, that 128GB SSD from Samsung has not even reached retail distribution channels yet. At this pace, Samsung could have a 512GB drive ready before the 256GB model hits stores.

It’s not just in the area of capacity that Samsung is working wonders either, because this solid state drive reads at 200MB/s and writes at 160MB/s. The goal is to have these drives ship by September. Start saving those pennies, because they’re going to be really expensive, I’m sure.