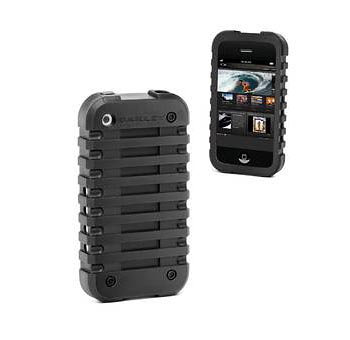 The timing of this release appears to be a little off, because it seems that Oakley is diving into the world of Apple accessories with the unveiling of a thick rubber iPhone case. The reason why I say the timing is a little off is because we’re fully expecting the 3G iPhone to be launched early next month. And the 3G iPhone is said to have slightly different proportions than the current model.

Yes, I know that many people will still be rocking the current Apple iPhone after the new model is released, but it automatically places Oakley a potential step behind the competition. They may have been better off waiting a month and then creating a case for the second-gen iPhone instead.

In any case, this Oakley iPhone case made of “Unobtanium rubber” will retail for about thirty bucks. Ruggedness included.