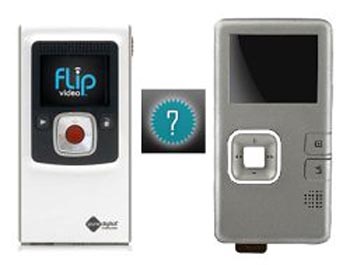 The Flip Video Ultra is the only budget-minded digital camcorder on the market anymore, but is the Creative Vado enough to dethrone the reigning champion of cheap video recording? Laptop Mag pit the two handheld movie machines against one another in a series of test and the net result might surprise you.

Going through many of the most critical features, Laptop Mag found that the Creative Vado was the overwhelming winner. The Vado is $30 cheaper than its direct competitor, it’s quite a bit slimmer, and it certainly helps that the Vado is more of a looker than the Flip Video Ultra as well. The design and interface are better. The specs look better on paper.

By and large, it looks like the Creative Vado is superior to the Flip Video Ultra in every way. Unfortunately for Creative, the Vado loses in the most critical area: video quality. The Flip Video Ultra wins that round and for Laptop Mag, that’s enough to recommend the Flip over the Vado. Better still, wait for the Flip Mino.