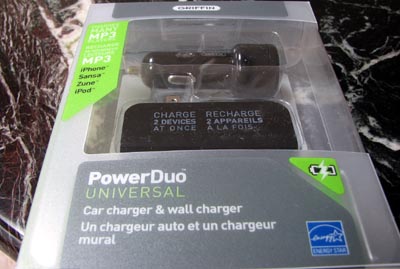 I can’t possibly be the only one who thinks it’s rather strange that there is no wall charger included in the package of the Apple iPod. This phenomenon can also be found several other MP3 players and other personal electronics. Instead of a wall charger, they provide you with a USB cable that is used both for synchronization and charging purposes. What if I don’t have a computer available to me? What if all I want to do is charge my iPod in preparation for my trip to the gym?

Griffin has long since established itself as a provider of excellent iPod accessories and that tradition is continuing with the PowerDuo Universal. Don’t have a USB port handy? No problem. Griffin’s got you covered.

The Griffin PowerDuo Universal is actually two separate devices that have been bundled into one convenient package.

The first of these two products is the PowerBlock Dual AC charger. In a nutshell, it converts the power that you can draw from a standard wall outlet into not one, but two USB ports. Each of these USB ports puts out half an amp of power. Although largely catering to the iPod owners in the audience, the PowerBlock Dual AC charger — which isn’t much bigger than the single port Griffin PowerBlock — will presumably work with any device that takes its power from a USB port. These include the Microsoft Zune, SanDisk Sansa, and Creative Zen series. I also got it to work just fine with my HTC smartphone.

The second product included in the Griffin PowerDuo Universal bundle is the Griffin PowerJolt Car Charger. Much like the PowerBlock, this device is meant to provide you with a powered USB port where you may not have one available. Instead of working with a wall outlet, the PowerJolt Car Charger (as you can tell from its name) is meant for use with a standard 12V jack in your car.

If you purchased the PowerJolt Car Charger on its own, it would come with a “free” USB-to-iPod cable. With the PowerDuo Universal, you have to provide your own cables. In exchange, you get about $10 in savings.

The PowerBlock Dual takes on the exact same form factor as the regular Griffin PowerBlock (single port) that preceded it. The body of the adapter, which is about half the size of a deck of cards, is colored black and gray. The power prongs can be folded into the body when not in use, and then you can flip them back out when it comes time to actually charge something.

Each of the two USB ports provides half an amp of charging power. According to Apple’s official specs, you should have a full amp to charge the Apple iPhone, but this assumes that the iPhone is actively using its wireless radios. The PowerBlock Dual AC charger should be able to provide enough juice to an iPhone in standby mode.

Near the two USB ports is a small green LED that indicates that the PowerBlock Dual is receiving power from your wall outlet. There is no indication as to whether it is correctly sending that power to your iPod (or other USB-powered device), so you’ll need to check your iPod display to make sure it’s working correctly. Not that you’d ever really need to check. This thing works like a dream.

The PowerJolt Car Charger is about the same size as just about every other car charger adapter that I’ve seen on the market. It is almost entirely black with the exception of a colored rim that surrounds the single USB port. As mentioned earlier, there is no USB-to-iPod cable included in the package, so if you want to charge something, you’re going to have to provide your own cable. 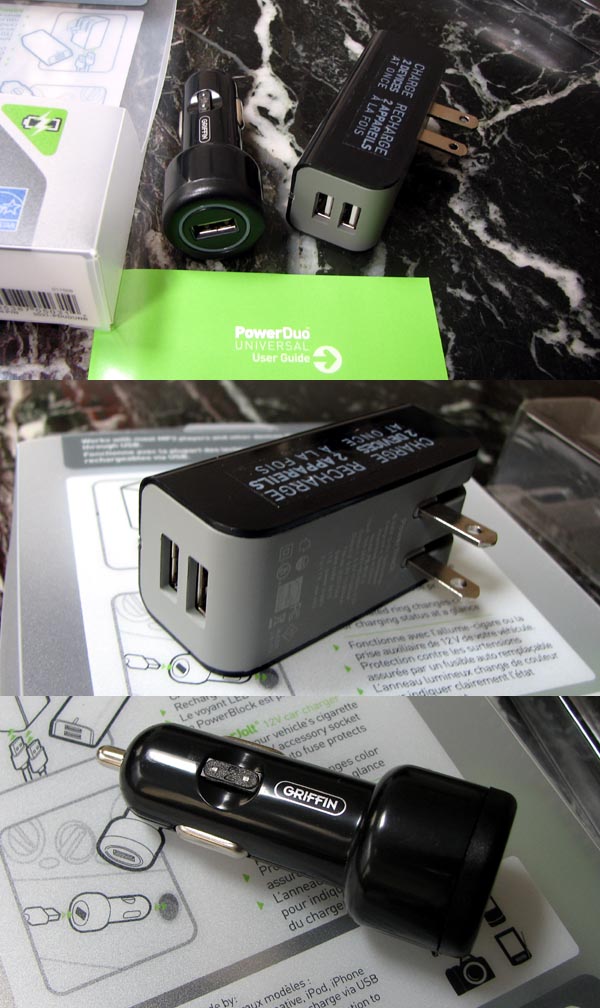 As you can imagine, everything works just fine and the build quality on the PowerJolt Car Charger is really good. The plastic may feel a little on the cheap side, but the seals are great and I had no worries about accidentally dropping the unit. Thankfully, the PowerJolt did not become hot to the touch while in use either, regardless of what I was charging. The inclusion of a user-removable auto fuse is a nice idea, but largely unnecessary. The cigarette jack in your car should already be hooked up to a fuse.

If you’re in the market for both a wall adapter and a car charger for your Apple iPod (or most other devices that charge via USB), the Griffin PowerDuo Universal offers a very solid and reliable solution. The MSRP on the package is about 35 bucks, which represents a $10 savings over how much it would cost if you were to buy the PowerBlock Dual and the PowerJolt Car Charger separately.

Yes, you can probably find less expensive adapters on eBay, but very few (if any) of these come with the same level of build quality and reliability as these Griffin accessories. I just wish that the Griffin PowerDuo Universal came in a few different colors, especially the Apple-centric glossy white.