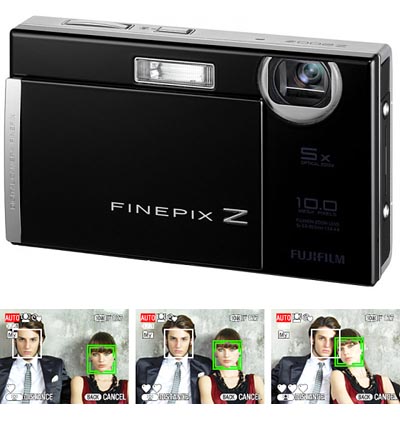 On the surface, the new FinePix Z200fd digital camera from FujiFilm looks like any other point and shoot on the market, but it comes equipped with a special feature for all the couples in the audience. Apparently, it has something that FujiFilm calls “ai suru taimaa”, which roughly translates to self-timer for lovers.

The self-timer on this camera has three stages. It will recognize where there are two faces in the frame and then the stage of the timer is indicated by the number of hearts on the display. A single heart is when it just sees to faces next to one another. The second heart appears when the two heads are a little closer together. The third and final heart appears when the two people are in a deep lip-lock in physical contact with one another.

Aside from the lover’s self-timer, the FujiFilm FinePix Z200fd has a 10-megapixel sensor, 5x optical zoom, 2.7-inch LCD screen, SD/SDHC/xD memory card slot, and ISO 6400. It’ll launch in Japan on June 7th for $390. Look for it in pink, silver, black/red, and solid black.