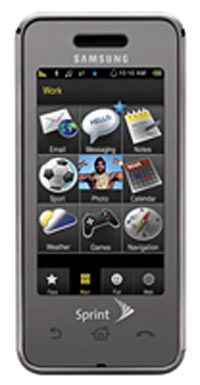 Sprint says that this touchscreen cell phone from Samsung is going to be one hell of an iPhone killer and we’re going to have the opportunity to find out for ourselves starting June 20. That’s the confirmed launch date for the Samsung Instinct, getting much more specific than earlier reports that pointed toward a “late June” release.

Interestingly, June 20 is more than a week after WWDC, an event where we expect Steve Jobs and the Cupertino crew to unveil the 3G version of the Apple iPhone. Aren’t Sprint and Samsung concerned at all that the 3G iPhone will steal some of the thunder away from the launch of the Instinct? They’re both touchscreen phones and they’ll largely be going after the same segment of the market, no?

In case you haven’t heard, the Samsung Instinct gets high-speed EVDO, a 2 megapixel camera, microSD expansion, stereo Bluetooth, and a high-resolution touch sensitive display. No word on pricing.