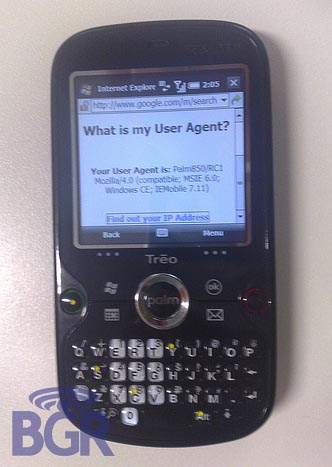 What do you get when you take the Palm Centro, let it pack on some extra girth, and throw Windows Mobile into the fold? The answer, it seems, is the upcoming Palm Treo 850. Although the Palm brand isn’t nearly as popular as it was several years ago, it seems that the Treo line is still alive and kicking.

The Palm Treo 850 appears to run on some version of Windows Mobile, but we can’t tell for certain exactly which version of the mobile operating system will accompany this device when it eventually finds itself on store shelves. We do hear that the Treo 850 is equipped with a 400Mhz processor and 100MB of RAM, however. The rest of the details are still pending.

As you can tell from the picture, the design of the phone is very reminiscent of the Centro, except the Treo 850 is decidedly larger. I am glad that the center strip isn’t as “in your face” as on the Centro. The all-black finish is actually quite attractive.