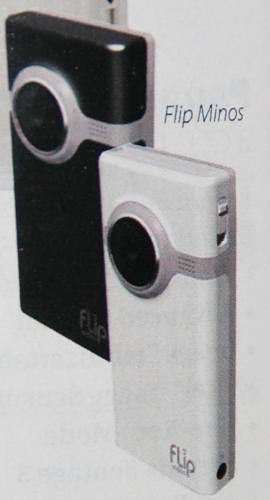 The Flip Video Ultra has become incredibly popular with people who want to record spur of the moment videos, largely for its ease of use and low barrier to entry. The thing with the Flip Video, however, is that it’s still a somewhat bulky device, measuring a little bigger than many point and shoots. That just won’t do, especially with summer just around the corner.

Countering the recent announcement of the Creative Vado, it seems that a slimmer version of the Flip Video is on the horizon and it’s going to be called the Flip Mino. Or maybe it’s the Flip Minos. I’m not sure. In any case, it seems that the specs will be much the same as the existing unit, except they’ve slimmed down the profile and presumably dropped a bit of weight. Hopefully the feature set is at least slightly improved.

The Flip Mino has been priced at $179.99 and it will sell in your choice of black or white. No word on launch date.