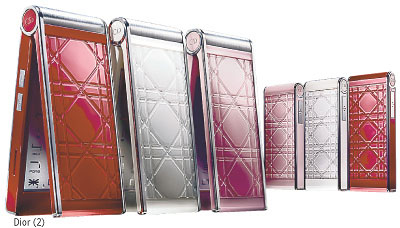 Better late than never. We initially heard that the Christian Dior fashion phone would be unveiled to the public as early as last Friday, but full details have not been released about the elusive and exclusive handset until today. That’s a good thing, because it gave you a few extra days to save those pennies and nickels in anticipation.

Teaming up with ModeLabs, Christian Dior SA is proud to show off their high-end fashion phone. To add to the air of “I’m better than you”, this range-topping handset has been priced at a cool $5,000. That price seems to include the matching “My Dior” speakerphone unit, which we previously thought was some sort of remote control. If you happen to rock some Dior clothing and maybe a Dior purse, you absolutely must buy this phone to complete the look!

In terms of specs on this boutique phone, you should expect a touchscreen display, metallic keypad, a camera of some kind, and your choice of couture-friendly colors. Only the best for frequenters of Rodeo Drive.