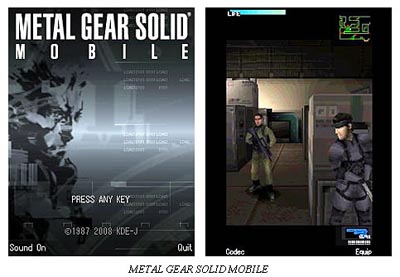 The graphics in this action title look pretty darn good for a mobile phone, being right on par with something like the first PlayStation or maybe the Sega Dreamcast. If I didn’t know any better, I’d say that this is a souped-up version of Virtua Cop 2 or something. Metal Gear Solid Mobile is a “new version of the classic game” but it comes with original content too.

Metal Gear Solid Mobile was developed in conjunction with Ideaworks3D and it utilizes the Airplay 3.5 SDK. It may not be quite the same as Guns of the Patriots, but it’s a heck of a lot more mobile. Snaaaaaake!