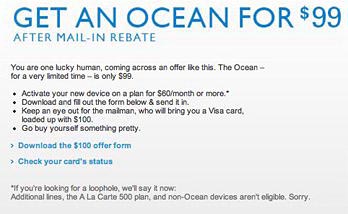 The Helio Ocean has one of the most interesting designs in the cell phone world and you can now get in on the three-layer action for just $99. Helio has dropped the price of the Ocean to a dollar shy of a Benjamin, but in order to take advantage of the $99 price tag, you’ll need to go through the process of filing a mail-in rebate. The good news is that it’s a brand new unit and not some refurb.

The Ocean, as you know, is a terrific device for web surfers, text message fans, and YouTube video watchers, thanks to the large color display and your choice of either a numeric or QWERTY keyboard. It’s really got everything that you’d need in a mobile phone; you just have to put up with the added bulk.

Some are saying that this significant price drop on the $99 Helio Ocean is enough reason to believe that Helio is on the cusp of launching the Ocean 2. The second-gen device was seen conquering the FCC offices in March, so it’s only a matter of time before it becomes available to the masses.