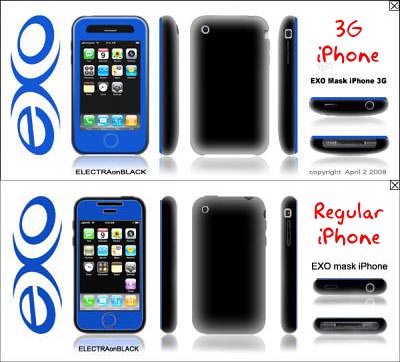 The 3G iPhone has not yet been officially unveiled by Steve Jobs and Apple, but it seems that they may have leaked out the reference design to certain third-party accessory makers. According to this rendering of the EXO Mask protective skin for the 3G iPhone, it appears that the upcoming cell phone will be thicker, wider, and curvier than the existing unit.

As you can see from the picture provided, there is a definite bit of extra thickness to the 3G iPhone and the back has more of a pronounced curve than the existing unit. This is in line with existing rumors about the relative proportions of the upcoming touchscreen mobile phone.

You’ll also notice, though, that the earpiece hole spans almost the whole width of the phone. Contrast this to the case for the current iPhone, where the earpiece hole is decidedly smaller. Could this extra space be making way for a front-facing camera? It’s plausible, maybe even probable, but we won’t know for sure until the Jobsian one takes the stage at WWDC.