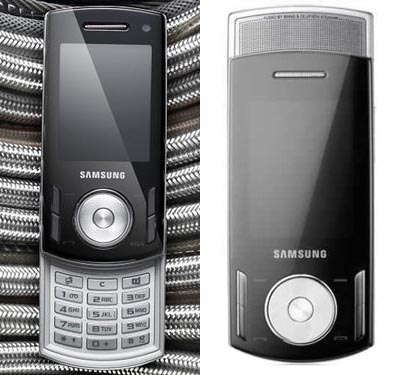 You know how the Nokia N95 has a dual-sliding mechanism so that you can access the numeric keypad one way and the multimedia controls the other way? The Samsung F400 has a similar form factor, but it’s not offering you multimedia controls. Instead, when you slide the front face of the phone downwards, you reveal a high-powered speaker courtesy of Bang & Olufsen.

The Samsung F400 is equipped with ICEpower technology is meant to “quench every music lover’s thirst.” The embedded speaker lets you share those tunes with those around you, while the rest of the phone can do its phone duties. The Smart Bass feature provides rich, deep, and powerful sound while the Smart Limiter keeps the audio signal in check. The F400 also has a music recognition application called Shazam.

Rounding out the specs on this slider music phone are a 3 megapixel camera, FM radio, Bluetooth 2.0, 1GB internal memory, and a microSD expansion slot. Look for the Samsung F400 to launch initially in France in your choice of black and white. No word on price.