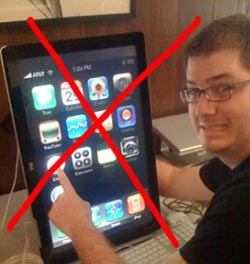 You may have heard some whispers lately about how Apple was thinking of using an Intel Atom processor for an upcoming tablet based on the iPhone. Intel says that these rumors are “a bit premature and overwrought.” The rumblings on the Internet started with some comments from the head of Intel Germany and it’s likely that these comments were not only cryptic, but poorly translated as well.

As it turns out, he was talking about types of gadgets, rather than specific ones that are coming the chute. What this means is that Apple could still be working on a tablet computer that will run on an Intel Atom processor, but there is absolutely nothing confirmed on that front. It’s within the realm of possibility and within the wet dreams of Apple fanboys around the world.

For now, we’ll just have to wait and see where (and if) Apple is going to Atomic with some sort of portable device.