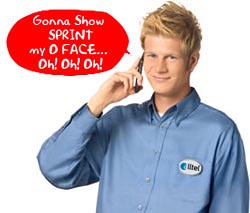 Even though Alltel is sometimes forgotten when it comes to discussions of national carriers, the little engine that could is still puffing along and taking customers away from the big four. According a press release that was issued earlier today, Alltel add no fewer that one million gross wireless customers in the first quarter of this year. That’s gross, so we’re not sure how many they lost along the way to the Sidekick-touting T-Mobile or the iPhone-boasting AT&T.

As it stands, the CDMA-based wireless service provider has over 13 million subscribers across the country and it continues to boast the “largest” network in the nation. We imagine that this claim to fame is referring to the physical coverage area of Alltel rather than the number of subscribing customers. The addition of one million gross customers (for the second consecutive quarter) contribute significantly to the fact that Alltel has a 63% increase year-over-year for net customer additions too.

Sprint must be feeling pretty bad these days, considering that they lost a million customers this quarter. And Alltel is laughing all the way to the bank.