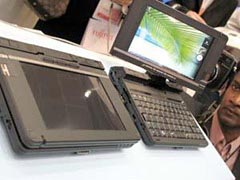 When the idea of the UMPC was first being bandied about, we were told that the handheld computers would be considerably more affordable that full tablet PCs. We were expecting to save mundo bucks by going with the smaller form factor. That didn’t pan out quite the way we expected, but with the upcoming release of the Intel Atom processor, we were once again told that we would be treated to affordable mobile computing. Fool me once, shame on you. Fool me twice, shame on me.

Fujitsu has just announced an all-new Atom-based UMPC called the Fujitsu U2010 and this ultramobile is clocking in at a fairly hefty $1,300. That’s more expensive than many consumer level laptops and that’s enough money to buy about three Asus Eee PCs. I thought that the Atom processor was going to make things cheaper. I don’t know about you, but $1300 doesn’t sound cheap to me.

Set for release in Taiwan this July, the Fujitsu U2010 UMPC gets a 5.6-inch rotating touchscreen, full QWERTY keyboard, 3.5G wireless data, integrated GPS, and that aforementioned Intel Atom processor.