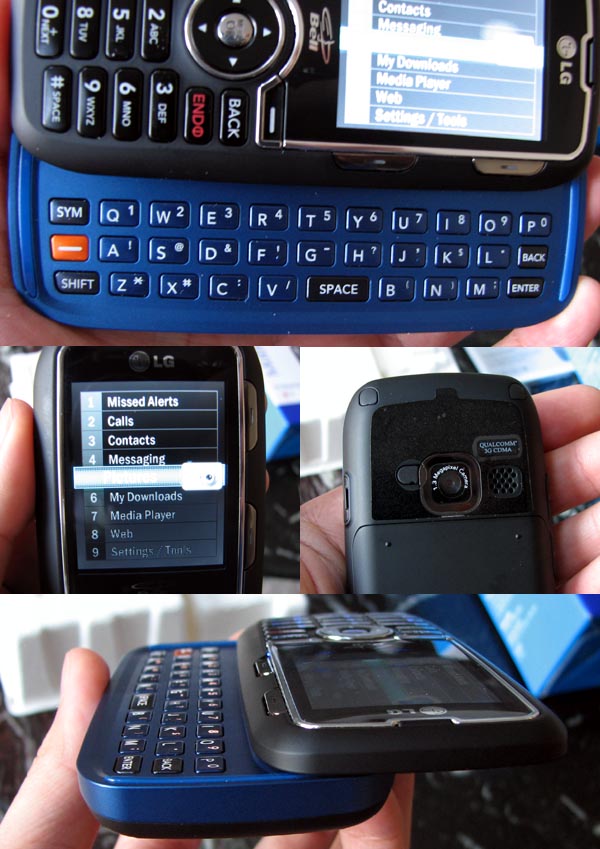 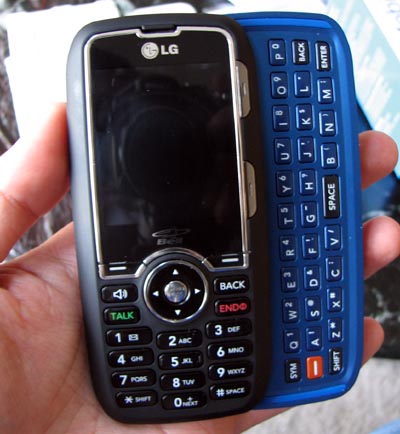 What happens when you take the LG Rumor from Sprint and transplant it to Canada? The result is something called the LG Rumour from Bell Mobility. As far as I can tell, the two main differences between this cell phone and the one offered south of the border are the addition of the letter “U” in the name and the inclusion of a little Bell branding. Does that mean that you should ignore this cell phone completely? I don’t think so.

If you think that the form factor of the LG Rumour looks familiar, that’s because it has essentially the same design as the HTC 5800, which is also available from Bell Mobility. This means that while the phone is in its closed position, you get the same experience as a conventional candybar style handset. There’s a regular-sized color display and a full numeric keypad. Navigating through the menus is pretty much what you’d expect from a conventional phone.

Slide the phone open sideways, however, and you’ll reveal a full QWERTY keyboard. The display automatically orients itself to landscape mode when you do this. The inclusion of a full QWERTY keyboard makes web surfing, emailing, and text messaging a heck of a lot easier than with the T9 predictive text that you find on most other consumer-level phones. Aside from the obvious, the major difference between this phone and the HTC 5800 is that the latter is a Windows Mobile smartphone. The LG Rumour is just a regular phone.

It’s obvious enough that the LG Rumour has been designed for people who love to text and who love to send e-mails on the go. Because they keyboard is slides out to the side, it is quite a bit wider than the keyboards that you find on devices like the BlackBerry Curve and the Motorola Q9h. I’d say that the LG Rumour has a keyboard that’s about the same size as a T-Mobile Sidekick, except that the Rumour itself is a fair bit smaller.

The keys are well-spaced apart horizontally, but I found that they wasn’t enough vertical separation. The edge of the top half the phone also gets in the way when you try to type the top row of letters. Key travel is good and I like the inclusion of the space bar in the middle. Symbols are accessed using the bright orange key on the left side. It’s unfortunate that there is no dedicated key for period though.

The build quality on the LG Rumour appears to be quite good. It has a slightly rubberized finish throughout, making it slightly soft to the touch and there’s a good level of grip as well. The numeric keypad is a little cramped, especially since there are six keys flanking the five-way navigator, making it a little more difficult to make calls without looking at the phone.

Aside from the ability to quickly fire off text messages, this slider phone also comes with a decent suite of additional applications and functions. The 1.3 megapixel camera isn’t anything to write home about, though it is able to take quick video clips. You can forget about taking pictures under low light conditions, because there are a lot of compression artifacts, not to mention the lack of a flash.

The web browser comes courtesy of Bell Mobility and it is able to “optimize” regular HTML websites for the small screen of the phone. It’s not the fastest thing in the world, but you can get the job done. The QWERTY keyboard especially comes in handy for this purpose. Other tools include a media player, calculator, voice recorder, alarm clock, and date book.

Cellular reception was decent when outdoors, but I saw the bars drop off quickly when I went indoors. Calls could still be completed, but the signal was weak. While in a voice call, the sound quality was a little strange in that I could almost hear an echo of my own voice. It doesn’t detract from the call, per se, but this is certainly odd.

Seeing how you can nab the LG Rumour for just $49.99 with a three-year contract, this QWERTY-packing messaging phone offers a great value for people who tend to send a lot of text messages or want a consumer-friendly way to access the mobile web. The LG Rumour will not satisfy the requirements of business users or people looking for top-end specs, but it’s more than enough for the average consumer.

The LG Rumour is available now. It comes in your choice of black with blue accents (as shown), or white with silver accents.