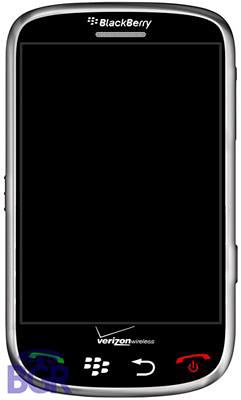 Also known as the BlackBerry 9500, the Thunder appears to lack any sort of physical keyboard at all, replacing all the core controls with a touchscreen display and four basic buttons underneath. This is similar, in many ways, to something like the LG Prada or the Samsung Armani. Contrast this to the single “button” found on the Apple iPhone.

In terms of specs, we can expect the BlackBerry Thunder to be a hybrid with CDMA EV-DO Rev.C, as well as the possibility of 4G/LTE and GSM/HSPA for international travel. Set for launch in Q3 2008, it seems that BlackBerry 9500 Thunder will be a “worldwide lifetime exclusive on Verizon and Vodafone.” Lifetime! That’s much longer than the five-year exclusive that AT&T got on the iPhone.