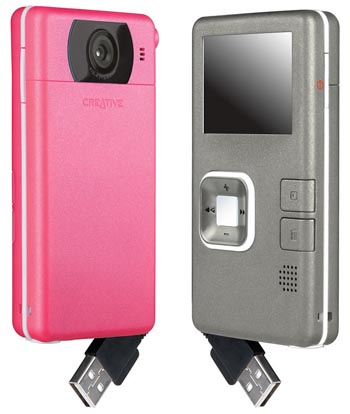 The Flip Video Ultra Camcorder has become remarkably popular largely for its ease of use, but it’s not going to have that segment of the market all to itself anymore. We heard the rumors and now it’s official. Creative has officially unveiled the Vado Pocket Video Cam, a handheld camcorder that will compete directly against the Flip Video Ultra. The kicker is that it seems even cheaper!

The Creative Vado (at least they didn’t call it a Vato Loco) takes on a form factor and a spec sheet that are virtually identical to the Flip Video Ultra. Movie clips are recorded at a VGA resolution and the Vado has 2GB of internal flash memory. That’s enough space for up to two hours of Dot Com Pho antics.

When you’re ready to view the videos on a bigger screen, you can connect the Creative Vado to your computer via the integrated USB connector. It shows up like a flash drive. Alternatively, you can use the optional software for instant YouTube posting and other features. The 2GB Creative Vado Pocket Video Cam retails for $100, is available in silver or pink, and is available as of today.