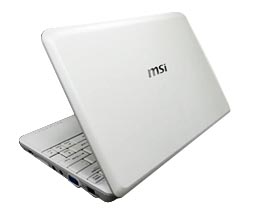 It could prove to be the best Asus Eee PC competitor to date and now we have some of the most important information surrounding the MSI Wind subnotebook PC. Not to be confused with the Eee or the Air, the MSI Wind will be offered in two different versions. There will be an 8.9-inch model and a 10-inch model, though only the latter will ship to the United States.

Both the SuSE Linux and the Windows XP models coming to the United States will come powered by a 1.6GHz Intel Atom processor, an 80GB hard drive, 1.3 megapixel webcam, 4-in-1 card reader, and three USB ports. The SuSE Linux model weighs 2.3 pounds, has 512MB of RAM, and comes with a 3-cell battery good for 2.5 hours. The XP model is 2.6 pounds, has 1GB of RAM, and boasts a 6-cell battery good for 5.5 hours.

The Linux-powered MSI Wind will retail for $399, whereas the beefier XP version gets tagged at $549. Look for both versions to make an official launch at Computex in Taiwan on June 3.