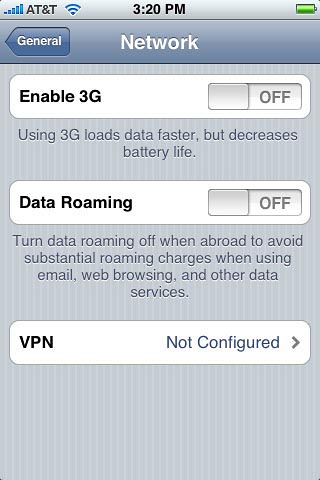 We can neither confirm nor debunk the legitimacy of this screenshot, but it seems well within the realm of reason that Apple would provide users with some way to control their wireless data on the upcoming 3G iPhone.

As you can see from the shot provided, the first toggle switch lets you turn the 3G radio on and off. Activate 3G when you want access to higher speed data and shut ‘er off when you want to conserve battery life. We all know that 3G can be one big power hog, so if you’re mostly on voice calls and text messages, there really is no need for the high-speed network. Part of the reason 3G wasn’t included in the first iPhone was for battery life concerns, so maybe this is aimed to address that.

The second toggle switch is potentially even more valuable, because it can prevent data roaming when you are latching onto a network other than your home settings (AT&T). They actually want to save money too! Imagine that.