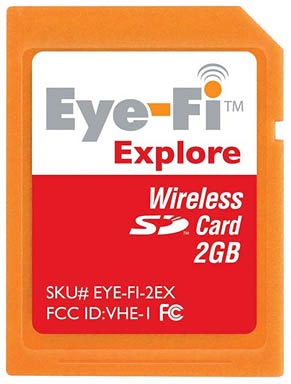 When the Eye-Fi SD card was first revealed to the public, I thought it was a rather clever idea. By integrated a Wi-Fi radio into the SD card, users would be able to upload their digital pictures without having to rely on any data cables or card readers. The developers have now taken the idea to the next level.

The Eye-Fi Explore Wireless SD card still comes with an integrated Wi-Fi radio, but it is also able to automatically add geotag information to all the photos you take with a digital camera. Interestingly, they’re not doing this by shoving a GPS radio into the postage stamp-sized memory card. Instead, Eye-Fi has partnered with Skyhook Wireless in the States.

The geotag information is derived by locating nearby Wi-Fi access points the moment a picture is taken. This information can then be interpreted and encoded into each photo. It’s not nearly as accurate as true GPS, but it’s also a lot cheaper. It also won’t work if you’re in the middle of nowhere. The 2GB Eye-Fi Explore SD card will sell for $129 when it goes on sale early next month.