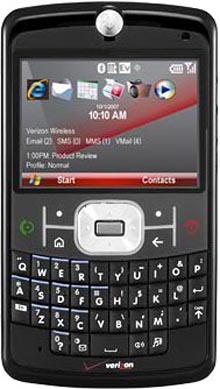 The GSM providers got first dibs on the upgraded Motorola Q9h, but the CDMA guys are starting to catch up. Verizon Wireless has announced that they are now the proud providers of the Motorola Q9c, a Windows Mobile smartphone that made its debut at CTIA earlier this year in Las Vegas.

By and large, the Motorola Q9c has much the same specs as the Q9h, save for a few cosmetic differences. You get a full QWERTY keyboard for ease of text entry, Windows Mobile 6, a 2.4-inch display, 1.3 megapixel camera, stereo Bluetooth, 128MB on-board memory, memory card expansion slot, and speakerphone. It’s also preloaded with Opera Mobile for all your mobile web surfing needs.

Verizon is selling the Motorola Q9c for $199.99, assuming that you’ll lock down to a new two-year customer agreement and deal with the $100 mail-in rebate.