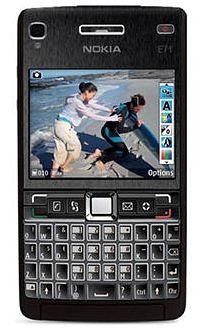 Some people, myself included, just can’t live without a QWERTY keyboard on our cell phones. The Nokia E-series has always been recognized for its top-notch business devices and the upcoming Nokia E71 should be no exception. We’ve already caught a couple glimmers of this Symbian smartphone, but an extra tidbit has just come down the chute that might be of interest to you. Turns out that the Nokia E71 could launch with AT&T.

This makes a lot of sense, considering AT&T’s dedication to both the consumer and corporate markets. The iPhone and other similar devices can take care of the multimedia side of things, whereas a device like the Nokia E71 can take care of business. It helps that it’s got plenty to style to back up that productivity too. We’ll tack this one up as speculation for now, but I think AT&T would be a good fit for the E71.

Let’s hope that the AT&T version of this smartphone takes full advantage of a 3G connection. Look for it in your choice of black or white.